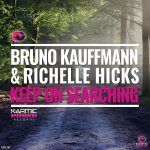 Bruno Kauffman and Richelle Hicks deliver a hot funky vocal house tune. Driving chords push the way forward on this hot track that may become one of your key tracks for your dj set. Bruno as a top producer has proven that he can deliver the right sound each and every time and this track will not disappoint.

Biography Bruno Kauffmann:
Bruno began his career in 1981 at the famous Parisian radio station “NRJ”. In 1983, Bruno is in the middle of the movement of clubs with a residency at the “club”. In 1991, he became a DJ at the famous club in Paris “the Boy” on Mondays with DJs ratings then a little-known David Guetta Laurent Garnier Stephane Pompougnac fred Rister Joachim Garraud … In 1994, Bruno moved south of France, where he quickly became resident DJ at the famous club “La Scala” in Cap d’Agde. IN 1995, Bruno became a resident “SLAVE bar” in Avignon. After three years there, he finally decided it was time to take a break and start working freelance for exploring the night at internationnal … Lausanne, London, Belgium, Geneva, Berlin, Paris, Monaco … mix it with David Guetta, Danny Tenaglia, Jack de Marseille, Charles Schillings, Stephane Pompougnac, Llorca, Claude Challe, David Duriez, Laurent Garnier, Kenny Hawks, DJ Paulette, Miss Honey Dijon, Jose De Divina, the chance to Lucy, Ceeryl , Lady Bird, Leomeo, Rork, Shadow, Nicolas Nucci, Lorent Air, Didier Sinclair, Dj Baccho, Mike Miller, Michael Canitrot, Benedetto & Farina dAfrESh David Vendetta and many more … Bruno in 2002 became a resident of the famous parties “Dolly Party” in the south of France, which allows one to discover the places and clubs such as “STEPHANO” in St Tropez the “NIRVANA” In Paris, the “Theatro” has MARRAKECH etc.. .. Bruno acknowledged today and enjoy the world of the night and it was with the production that will make you discover his musical universe always with the “gay” smile. Bruno would like to thank all his family and friends for their unconditional love and support continuous…

Biography Richelle Hicks:
Richelle Hicks is originally from Massachusetts singer and songwriter who has so much to offer to the house community. Her beautiful vocal capabilities always stand out in her music and her love for life is always portrayed in her music. She lived in New York for a while where she performed in the clubs and also did a cover of Patti LaBelle’s song “Music Is My Way Of Life”. She draws her inspiration from various Gospel, Soul and Jazz artists which is always reminiscent in her music. Now living in Chicago on a new journey.
[amazon_link asins=’B07B7NBTVL’ template=’ProductCarousel’ store=’warnowbiz-21′ marketplace=’DE’ link_id=’a5c15055-56bc-11e8-835a-b7ada658805d
‘]